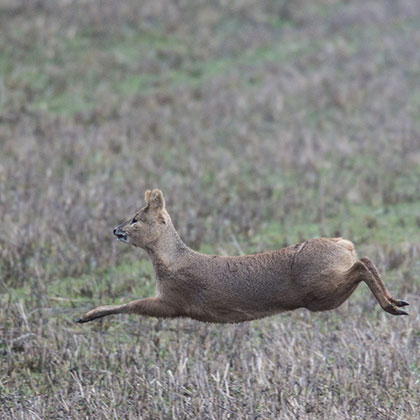 Chinese Water Deer are a non-native species introduced from Chinese populations along the Yangtze River where they are on the IUCN 'red list' as a vulnerable species. They are said to be the most primitive living member of the Cervidae family, in part because the buck carries large canine teeth or tusks and has no antlers, characteristics that other deer have evolved beyond. This makes the Chinese water deer a biologically important animal.

Chinese water deer are the least common of the UK wild deer species, they are a territorial species and their distribution is largely limited to the Midlands and East Anglia. They have been in the country for longer than muntjac and have a potentially higher birth rate (usually twins or triplets) but although they are increasing in range, they are doing so far more slowly than muntjac.

Preferred habitats are woodlands next to grazing areas and more open and wet areas such as reed beds, boggy areas and river edges. They adapt readily to open areas of grassland such as agricultural fields and parks, and are often to be seen out in daylight.

Chinese water deer appear to have the least impact on habitats and crops of all of the UK deer species when at reasonable density. As a non-native species they have been added to section 9 of the Wildlife and Countryside Act 1981 which is intended to prevent their release into the wild.