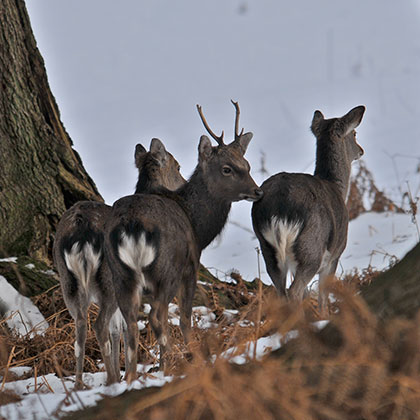 Sika are a non-native species, originating from the Far East where some 13 different races are recognised, many of them endangered in their native countries.

Most sika in Britain are Japanese in origin and were brought first to Ireland in about 1860, to Powerscourt, and thence to a variety of places in England and Scotland. Some were released deliberately, eg. in Kintyre, the New Forest, Dorset and Bowland forest. The deer at Bowland are thought to have been Manchurian sika. Others escaped from parks, especially during the two World Wars, and established feral populations.

In recent decades sika have significantly extended their range. In England sika are to be found in Lancashire and Yorkshire, southern and mid Dorset and the New Forest. In addition, small local populations exist in the vicinity of several of the parks from which they originally escaped.

Sika prefer woodland or thicket and graze on nearby open areas such as farmland or heath/moorland. They are herding animals which rut in the autumn, usually producing single calves in the spring.

Populations which are subject to disturbance may become largely nocturnal.

Sika should be managed in a similar way to the other larger, herding species with cooperative management across boundaries often being necessary to manage them across the herd range. At high density they may cause considerable damage to native biodiversity and to farm and forest crops. Interbreeding with red deer is a major biodiversity concern. They are included in Schedule 9 of the Wildlife and Countryside Act 1981 which is intended to prevent their release into the wild.