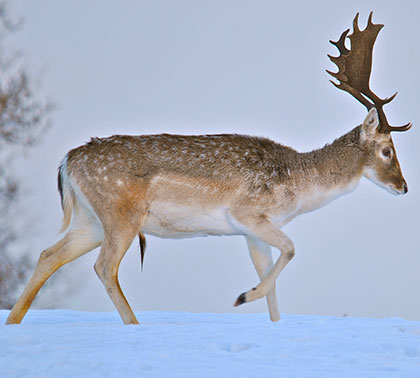 Fallow are considered as a naturalised, though re-introduced species. Although fallow deer were present some 400,000 years ago in Britain, later glaciations restricted them to the Mediterranean basin. There are no reliable records of them being imported into Britain before the Norman Conquest, after which they were kept widely in parks for both food and ornament. They were also preserved in the wild for hunting, eg. in Epping Forest and the New Forest.

The present feral population owes its existence largely to park escapes. Many parks were broken up during the Civil War (1642) and again during the two World Wars. The fallow deer range and numbers have increased substantially since 1972, see distribution map.

Fallow are a herding species and exhibit extreme flexibility in most aspects of their social organisation, group size is flexible and influenced by both habitat and season. In high-density populations in large woodlands, males live in separate groups to the females and young, except during the autumn rut. In lower-density populations in agricultural areas, however, mixed-sex groups may regularly occur throughout the winter. Fallow have a variety of mating systems ranging from non-territorial defence of harems to the development of clusters of small mating territories or "leks". Fallow generally produce single fawns on an annual basis.

The ideal habitat is a mosaic of established mixed broad-leaved woodlands and arable fields. However, fallow make a living in a range of habitats, from commercial conifer plantations to large open agricultural areas with small woodlands. Although primarily grazers, they take a variety of vegetation and, at high densities, may cause considerable damage to woodland flora and forestry or farm crops.

Management of fallow populations is considered to be essential and may only be effective if carried out by collaborating on a landscape scale because of the tendency for fallow herds to move widely across their habitat.